Why Do We Feel We Need To Be Nice When Rejecting Guys? – Glamza.com
Skip to content 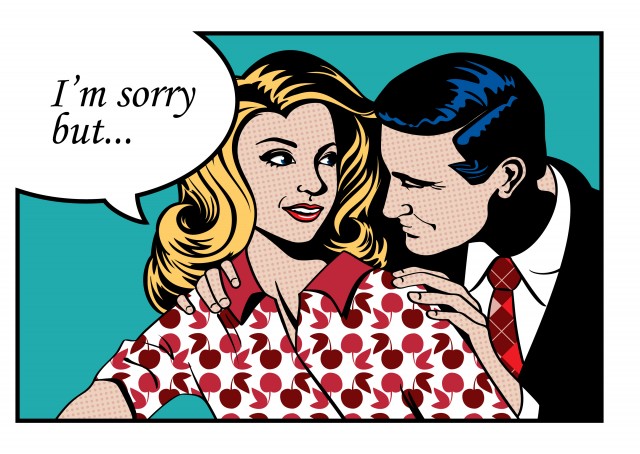 I’ve been going through a less than fabulous time in my life lately. However, right before this downward spiral of anxiety and despair really hit the fan, I was trying to “get out there” more and “open myself up to others” (read: men) as a part of a holistic approach to finding out the truth of where I’m supposed to be in my life and with whom, if anyone. So I decided to get back online and reignited the ol’ OkCupid profile (Tinder gives me hives), update the pics and revamp the text to a less sardonic, more “easy breezy, beautiful CoverGirl” kind of vibe. I was open.

But right as I was dipping my toe back in, my dog got sick. I had her for 16 amazing years and she was the only constant in my life. When she got sick, things got bad, but I had already accepted a first date with a Mark Ruffalo-esque looking dude who didn’t seem like an axe murderer (I have high standards, I promise). We met at a local coffee shop and he looked like his pictures and seemed nice, but he wasn’t really that funny because he didn’t get my jokes (no points). However, he was sympathetic about my dog being sick (points). We chatted a long time and actually discovered we had mutual friends in common (points).

He told me he was taking his father to Europe for his birthday (more points) for a few weeks, but asked me out for when he returned (points). There were enough positives that I agreed to a second date when he got back, even though I wasn’t feeling the chemistry. He was good on paper and I chalked it up to me being in a fog. He walked me to a Chinese takeout place where I was going to pick up some pork fried rice for my pup, (she loved that stuff) and then something weird happened, which should have been a red flag but I didn’t see it.

I went in for a hug and he planted one on me…with tongue (subtract major points). Now, kissing on a first date isn’t “weird”, really. However, it did not fit the vibe that was going on. I was shocked. Now, I’m no prude, and we had a nice enough time, but the idea of kissing him never once crossed my mind.

As I sat waiting for my take out he texted me, “You got kissed! You should have seen your face—lol—it was cute.” To which I responded something like, “Haha— yeah that was a surprise.” A few more pleasantries were exchanged before his trip, but I couldn’t help to think this guy can’t read signals. Or maybe he’s too self involved to notice my responses to things?

Then my dog passed away. Six weeks of hell and sleepless nights ensued, with my food groups being cigarettes (I started again after a 10 year hiatus) and maybe a slice of pizza thrown in on occasion. I was a devastated.

It was him. I told him about my pup, then he asked me to go out that night and I was like, “I’m not in a place to hang out right now. Maybe in a couple weeks.” And I meant it. A couple weeks passed and…

I still wasn’t in a great place. I was crying all the time and leaning on my good friends. The idea of getting it up for a new person seemed exhausting. I told him I still wasn’t in a good space to go out. He wrote, “You know what would make you feel better? A distraction.”

Ugh. I wasn’t really up for it but he was so persistent (read: does not listen), I said yes, not only in an attempt to be among the living but also to shut him up give him a chance.

I explained that I was crashing early these days and can we please meet around 7ish? He agreed. Around six thirty he texted he was running late by an hour due to a “work thing” (subtract points). We had dinner plans so I hadn’t eaten and even though I was miffed, I acquiesced. This was my mistake. Then ANOTHER text, he was going to be another 45 minutes late. WTF dude? (negative points).

In retrospect, I should have said, “Let’s do this another night,” stood up for myself and what I wanted, but I was exhausted and wanted to be nice. I mean, it was a work thing, right? I should understand, and at least he texted. So we ended up eating dinner at 9 pm, which is exactly what I didn’t want to happen.

Dinner was fine, he was okay, although still not funny (points are so in the red). I was tired and really hungry and ended up having a glass of wine on an empty stomach. My second step on the bad choices train. Dinner ended and I wanted to go home, but I was a little buzzed from the glass of wine and he was walking behind me, touching my shoulders and, I have to admit, someone touching me felt good. It had been a very long time since anyone had touched me and it was a reminder of male attention I’d been lacking.

He suggested we go for another drink and I happen to live next to a wine bar. I was reluctant, but as we approached I saw friends of mine were inside. They beckoned to me to come in. They offered condolences about the doggie and along with that, more wine.

Now very buzzed, we left and the guy walked me to my door. I heard the words come out of my mouth, but it was as if it was another person saying, “Do you want to come up for a bit?” The bad choices train was running at full speed and I seemed to be all aboard.

We made out on the couch sloppily and briefly and all clothes stayed on. Honestly, I wasn’t really in my body. I was grieving and numb and buzzed. It felt good to have a man there but I felt no real connection and I asked him to go after less than an hour and I got off the bad choices train before it derailed.

After that, I went to LA for a month to heal and get some time out of the apartment that was full of reminders of my doggie.

He texted me to see how LA was treating me. I answered in short answers, not wanting to engage.

He texted me memes that made no sense. I ignored them.

He texted asking when I was coming back.

Finally I said, “Hey, I’m trying to heal and I’m not in a good place for dating right now.”

I ignored them. I thought I was clear that I wasn’t interested, nor was I in a place to date…him especially. This guy clearly doesn’t listen, but then again, have I been totally clear? I did know the constant checking in on me like I was a Thanksgiving turkey really turned me off.

Again I wrote, “Hey, I’m still not in a great place. Thanks for your concern, but I’m not currently open to dating.”

Wrong. This guy did not pick up signals—or words, apparently.

They were coming weeks apart. Now keep in mind: We only went out TWICE. First date in March. Second date in May.

It’s September. Almost SIX MONTHS after our first of only two dates and he hasn’t stopped. I ignored all communication. Last week, I was out with friends after posting an article on Facebook in support of the march in NYC for women’s rights to go topless. I said something about how awesome it was and, being cheeky, how some of the photos made me feel better about my boobs.

“I can’t stop thinking about that hot makeout session we had and your amazing boobs…” I’ll spare you the rest of the details, and honestly, I deleted it after reading it to the table who all had their opinions on how to handle it.

“Block him, “ said my guy friend. “Tell him you got back with your ex,” said another friend. I don’t like to lie, I’m bad at it. Plus, I hate the idea of saying another guy has “dibs” on me to make this one go away. “No, you need to write him and say to never text you again!” said my wise, married, female friend.

This made me question myself. Why was I so reluctant to reject him openly and pointedly? I do consider myself a feminist, an enlightened person, a direct individual, and yet I couldn’t get over this…fear, I guess, of not being nice, of the need to protect his feelings. A person I hardly knew.

This was obviously not a real relationship, so why did I feel badly just telling it like it is? There’s nothing to lose here. As women, we are taught from an early age to be polite, sweet, not to rock the boat, and don’t upset people if you can help it. Not new news. I don’t have this issue in other areas of my life, but this one still persists. It’s time to buy some big girl pants and say what I mean, because really, if he’s going to call me a bitch then that’s the kind of guy he is, and if he’s not, maybe he’ll appreciate the directness?

Also, let’s face it—that last text was bullshit. It was crossing a boundary that he had zero right to cross. If we were actively dating and hooking up I can see where that kind of thing would be cute, hot even…but this reeked of inappropriateness as much as Kanye’s Twitter fans thinking he’s going to make Paul McCartney famous.

The truth is, this guy wasn’t taking no for an answer, but I never did directly tell him “no”. I was skirting the issue as much as he was being aggressive and that’s my responsibility to myself.

So here’s what I am going to send: “Hey, I have to let you know I feel that last text was really inappropriate. I’ve let you know I’ve not been open to dating. Just because we had two dates and one brief makeout session doesn’t make it okay to talk to me that way as we’re not intimate partners. I obviously need to be more direct than I have been because I owe that to not only you, but to myself. I’m not interested in pursuing things with you.”

Full disclosure, originally I had in there, “I know it wasn’t your intention to be offensive…” But screw that. I deleted it. That was for him, not me. I’ll let you know what happens, if anything. But I for one, feel more empowered and ready to purchase some sexy, strong, no bs, big girl pants.